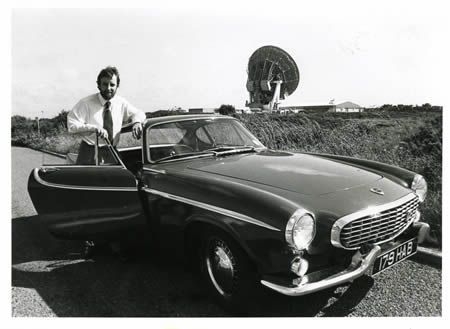 The Volvo Enthusiasts Club was formed by me Kevin Price in October 1989. Why it was formed and how may be of interest to current and prospective members. It was originally, prior to its launch in October 1989, going to be a purely Volvo 1800 Series Club. The reason for its formation being that, unlike many other countries, there was at that time or not since, a club in the UK specifically for the Volvo 1800 model. However word that I was about to launch a club soon spread and I was inundated with letters, telephone calls etc from people who owned other older Volvo models who wanted to join a club which catered only for the classic Volvo models, and why couldn’t they join?
So the Volvo Enthusiasts Club was born, an age limit was set, only cars over 15 years old would be eligible to join and ALL models would be welcome. This age limit was later extended by popular request to include ALL out of production Volvo models and all Volvo engined vehicles including boats, trucks, buses etc.

The Club today is still the only club in the UK , which specialises in the older and Classic Volvo models.

The Club is totally independent but enjoys good relations with Volvo and is self financing through membership, sale of advertising space in the magazine, Club Regalia, spares etc.

The purpose of the club is to encourage ownership, interest, preservation and correct maintenance of ALL Volvos over 15 years old or out of production models and to serve as a source of technical information and parts through a friendly family style club.

Because my main area of interest and knowledge was originally the 1800, (I am internationally recognised as being the authority on the Jensen built P1800’s and with other fellow founder members some of the best authorities in the UK on the other 1800 models), I felt it was important right from the start to find Technical Co-ordinators, specialists for each of the models the club covered, to answer members queries on restoration, purchase, problem solving etc. This we have expanded as the years progressed and model types have increased. This has become an important function of the club and all models are covered.

In 1992 we launched, due to a large number of enquiries, a Volvo Bus and Truck Register within the club and appointed a Technical Co-ordinator to cover these vehicles. The post is at present vacant so if any reader is interested taking this area on I would be pleased to hear from them.

With the general increased interest in Classic Motorsport and the very successful use of Volvos in Classic Race and Rally events, both in the UK and abroad in recent years we, in 1994, appointed Peter Boekman as our Race/Rally Technical Co-ordinator. Peter had a vast knowledge of tuning Volvos and had prepared a large number of cars including a number used on the 1993 London to Sydney Rally. I took over from Peter in 1998 due to his work commitments and in 1999 I was one of the Scrutineers on the Monte Carlo Challenge, following problems encountered by Rally organisers had experienced with the Volvo entries. An increasing number of members have made use of this section of the club. I would at this point also like to thank club members Joginder Singh (winner of the 1965 East African Safari Rally in a PV544 and Stuart Collins who is well known with his 120 in the Classic Rally field) for their help/advise.

The Club started in 1989 with about 50 members, it now has a Membership database in excess of 1500. Membership is not only limited to Great Britain . We have members in all four corners of the world including Japan, Australia, Brazil, USA, Papa New Guinea, Brunei Darussalam, Greece, Sweden, France, Belgium, Alaska etc etc. In order to encourage the family atmosphere of the club we appointed Overseas Representatives of the Volvo Enthusiasts Club, so members have a point of contact should they have problems etc in a particular country. Area covered include: Belgium , France , Sweden , USA , Australia , Greece , Brazil etc. In fact in Greece we even have a satellite Volvo Enthusiasts Club Co-ordinated by member Andreas Victoratos.

Local Groups are an important part of any club. The Volvo Enthusiasts Club has a number of active groups around the UK , which meet regularly and also organise events for all club members. We also have Regional Co-ordinators who are a first point of contact in an area for members who live in an area or have problems say on holiday in a particular region.

Our International Gathering takes place always on the first Sunday in July and is held in the Midlands to help easy access to all. See our Current Events page.

The Club has its own Spares Service for Members, which provides a large range of spares and services. It has also had a number of parts remanufactured, which have become unavailable.

The Club has over the obtained a number of the Special Volvo Tools required to work on older Volvos and these are available to members though our loan service. A full list of available Tools are posted on our Web Site. We are always interested in obtaining more tools so if any reader has any for disposal we would be pleased to here them. We would like to obtain a full list of the tools and their numbers particularly for the more modern models e.g. 200, 700, 480, 300 etc

We are building up an extensive Technical Library which includes many rare items, we are pleased to hear from anyone who has items which may be of use e.g. Workshop Manuals, Parts Lists etc. We are particularly keen to obtain a full microfiche of parts so that we can identify a large stock of redundant genuine parts we have in stock

Classic Motor Insurance is very important and we are pleased to offer members our own insurance scheme through market leaders Footman James. This includes agreed value and multi-car/vehicle policies. We also provide members with valuations for insurance etc.

For prospective Classic Volvo Owners we offer a ‘Buyers Guide Service’. This, for a fee of £5.00 £3.00 refundable against first Membership), offers a list of cars for sale plus an in depth guide of what to look for each model the club covers. This has been very successful and we are also pleased to hear from ‘Classic’ and older Volvo model owners with cars/vehicles for sale to be added to our list.

The Club displays at a number of Classic Car Shows around the country including the Classic & Sportscar Show and the International Classic Motor Show at the NEC Birmingham and the Bristol Classic Car Show. A list of our awards can be found on this Web Site in the ‘Volvo Enthusiasts Club Hall of Fame.

The Club has in its ranks a number of extremely rare vehicles including one of the oldest Volvos on the road in Britain a 1938 PV52, the oldest Volvo truck on the road in the UK, a 1954 PV834 Light Truck, a 1953 PV831 Limousine as used by King of Sweden, King Gustaf1 VI and a 1962 Jensen built P1800 which has covered over 1 Million miles on its original engine.

The Club was founded in 1989 and became a not-for-profit limited company in 2017, when the current officers were confirmed in a membership ballot to adopt the new structure. The club has two unpaid Directors, Kevin Price, and Mathew Stadden who own the name and assets of the club, by reason of having provided personal financial investment throughout its history. There are two unpaid Club Coordinators, and a regional structure of volunteer officers. The Club is in entirely independent of Volvo Cars UK, and is not supported in any way by any commercial body, other than those advertising in the club magazine to support its production costs.

1.    AIMS AND OBJECTIVES OF THE CLUB
To promote fellowship between owners of historic and out of production Volvo cars and commercial vehicles, and to provide mutual support to members through the organisation of an annual cycle of static and driving events in which to enjoy the use and display of their vehicles, and the loan of special tools and technical literature.  The club is dedicated to the restoration and preservation of historic Volvos and promoting the Volvo brand heritage.

3. CONDUCT OF MEMBERS
Members are expected to conduct themselves appropriately, to treat other members with courtesy honesty and consideration at all times, and to uphold the good name of the club.  Any complaint of misconduct will be investigated by the Directors and may lead to the termination of membership.

4. CONFLICT OF INTERESTS
To avoid potential conflicts of interest, no person engaged in any form of business serving the classic car hobby may become a club officer. Although welcome as ordinary members, no such person will be permitted to use the club as a platform for the promotion of any business, or monetary gain.

5. EQUAL OPPORTUNITIES
The Club treats all members equally, regardless of ethnicity, religion, sexual orientation, gender or disability and will make reasonable adjustments to maximise access and enjoyment of its events.

6. BENEFITS
The club’s main event is the national gathering held each summer at a changing venue in central England. The majority of awards are voted for by the members and any special presentation is at the discretion of the Directors.
The club publishes a quarterly colour magazine, organises driving events and attends classic car shows displaying members’ cars to promote the Club. The club assists members with locating rare spare parts and provides technical support by volunteer Technical Co-Ordinators and its library of technical information.  The club also provides a vehicle valuation service for insurance purposes and assistance with DVLA V765 Applications to recover lost vehicle registrations and can provide Build Date Certificates for the purpose of securing Age Related Registrations.

7. COPYRIGHT
The club asserts its rights to its intellectual property under the terms of the Copyright Designs and Patents Act of 1988 and all subsequent amendments to the Act. All printed and digital output from the Volvo Enthusiasts Club (1989) Ltd. Remain the property of the club, and may not be used without the permission of the Directors, C/O Volvo Enthusiasts Club, 21 Woodford Close, Hightown, Ringwood, Hampshire, BH24 1UT.

8. LIABILITY FOR PUBLISHED CONTENT
The views and opinions expressed in the club’s printed and digital output are those of the individual writer and do not necessarily reflect the opinions of the administration of the Volvo Enthusiasts Club 1989 Ltd, or its membership.  Whilst every care is taken when accepting advertisements the Club cannot accept responsibility for any resulting unsatisfactory transactions.  All information is given in good faith and the Volvo Enthusiasts Club (1989) Ltd cannot be held responsible for any errors or omissions.

9. DISBURSMENTS AND FINANCIAL ACCOUNTS
Reasonable expenses will be paid to club officials for the organisation of events provided approval is obtained in advance.  Approval is at the sole discretion of the Directors. The club appoints an accountant, to prepare accounts for publication via Companies House as a legal duty.

10. DATA PROTECTION
The Club membership records are subject to Data Protection Legislation and information contained therein will not be disclosed to any other person or organisation for whatever reason.